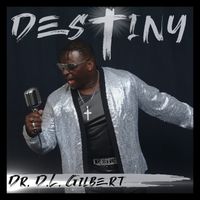 From the recording Destiny

Refuse to be anything but free
Living in the shadows of what could be
Reminiscing the days of every dream
That never became a reality
The could'ves, the would'ves, the should'ves that didn't
All of those charts you could've been hittin'
Silent rhymes. Lost time that could never come back
Could've been running on the big boys' track
But wait! It's not over. It's not the end yet
I'm bearing good news. You don't have to regret
You still got a chance. So put on your pants
Get up and just dance, and then take a stance
Your creative side is still alive
You're 'bout to thrive. God's on your side
Unleash your creativity
And walk into your destiny
Remember the days you didn't wanna face it
Wishing so often that you could erase it
Fear of the unknown. Afraid to embrace it
Wanting so bad just to replace it
Having no idea of what it could be
A future beyond what you currently see
What is my future reality
Can somebody show me my destiny
That's where you were, but not never no more
Stick your chest out and walk through that door
All that potential... You gotta let it out
Giving the world something to talk about
'Cause, folk always got something to say
And haters gon' hate on you anyway
So, while their eyes are on you, give'em something to see
Running full speed ahead toward Destiny
You have purpose that's living inside
Run toward Destiny. Enjoy the ride
Books you'll write, hearts you'll melt
Dreams'll ignite. Your presence'll be felt
Like a ten ton boulder, with the world on your shoulder
Releasing it all, with nothing left over
Pshh! You da man, da woman, da girl, da boy
You ain't no joke. You da real McCoy
What God put inside of you, you can't fake it
You got everything inside of you to make it
Your purpose is greater than you can imagine
Be encouraged, Blessed Seed, and make it happen
Run, walk, crawl. Whatever you gotta' do
Destiny is waiting. It's waiting for you
Now, here's the empowerment before I go
Y'all know I'm the MusicPreacher, so just let me flow
Let me reason with the king and queen in you
To give you a Word, a Word to cling to
Your destiny awaits. You'll reach it by grace
And that's the Word that you must embrace
No need to worry. God'll help you do it
He called you to it. Won't He see you through it
Your destiny awaits and it's waiting deliberately
Just for you to use your ability
And everyone needs a little push sometimes
So I hop I'm helping you through these rhymes
But I'm just about ready to drop this here mic
Your destiny is waiting, and it's shining so bright
So, be about your purpose, before it's too late
Time's getting shorter y'all... Destiny awaits!